Stay tuned as we build our gallery of photos.  Please send us your treasures with a description so we can add them as well.

Here’s a taste of more to come! 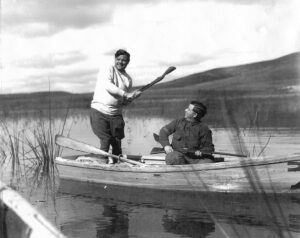 Babe Ruth {George Herman Ruth} visited the South Bay a few times in his lifetime. This picture is connected to one of his most memorable visits to our community. On January 12, 1927, Babe Ruth is shown standing in a rowboat, holding the wrong end of a shotgun on Sweetwater Lake as Linn Platner watches. (Courtesy San Diego History Center)

The Babe was in our region for a one-week vaudeville engagement at the Pantages Theater on Fifth Avenue and B Street in San Diego. He performed three shows in one day performing in a skit and giving hitting demonstrations. Ruth would invite children to come on stage and receive autographed baseballs.

Besides performing his three shows a day at the Pantages he found time for duck hunting on Sweetwater Lake, playing golf at the Coronado Country Club, and deep-sea fishing off Point Loma. Among his friends was Chula Vista resident John Torres Meyers. “Chief Meyers” as he was known, played for the National League Giants from 1909 to 1915, and was a member of the Cahuilla Band.

Ruth had visited our region before. First in 1919, two days after the Boston Red Sox sold him to the New York Yankees. He had just finished the 1919 season, hitting a record 29 home runs. Ruth and fellow big leaguers would play local amateurs. They played at City Stadium (Balboa Stadium) before a crowd of 6,500. Again in 1924 he arrived with major league players for exhibition games at City Stadium.

His third trip to our region was in 1927.  Two days after this picture was taken, one of the children Ruth invited on stage at the Pantages Theater was an 8-year-old child movie actress named Baby Annette. She recited a poem and received an autographed baseball along with the other children on stage. A deputy state labor commissioner, Stanley Gue, served Ruth with a warrant seven days later while he was performing his vaudeville act in Long Beach. He was accused of making children a part of his act at the Pantages without obtaining work permits for the children. A second violation was given for having children on stage past 10pm curfew. Ruth was arrested, taken by sheriff’s deputies from his act to the Long Beach Police Station. He wore the baseball uniform used in his act and a sweater he had worn to the Rainbow Angling Club. He had stage makeup on and smelled like fish. The Babe was photographed and posted $500 bail with a hearing to follow. Ruth, for giving children a thrill, was quoted as saying “I’ve only tried to give them a little bit of sunshine. I have never been so mad in my life”. The next month a San Diego judge dismissed the charges. This incident perhaps was a contributing factor to Ruth not following through with a La Mesa home purchase. Ruth returned to New York to play for his team, the New York Yankees.

Ruth, with his team, wins the World Series, and he sets a new record of 60 home runs in a season. A record that would stand for 34 years. That same year 1927, after winning the World Series and setting a new home run record, Ruth returned to San Diego’s City Stadium on the last leg of a 21-city, nine-state tour. For these exhibition games the Babe brought a young rising Yankee star Lou Gehrig.This being Ruth’s last appearance in San Diego was before 3,500 fans. George Herman Ruth Junior, “The Babe”, “The Bambino”, the “Sultan of Swat” went on to become an American sports legend. In 1936 he was one of the first five inaugural members to the Baseball Hall of Fame. (Sources Chula Vista Centennial by Steven Schoenherr, Chula Vista Public Library Archives, San Diego Union Tribune, Voice of San Diego, San Diego History Center) 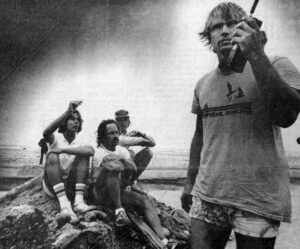 A Walrus tusk fossil… found here in Chula Vista and named after our town..  The Valenictus chulavistensis, roamed the neighborhood during the Pliocene Epoch.  This can be visited in the San Diego Natural History Museum.  One of the tusks was broken during excavation, but a pre-historic dental fix-it guy glued it back on.  A model of this can be found at the Living Coast Discovery Center on our bay front.  Come visit!