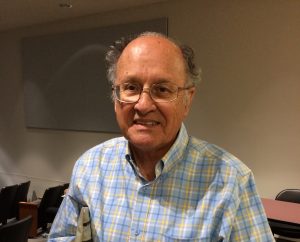 In 1959 his parents bought a home in Chula Vista and moved to a house on H Street between 1st and 2nd street. Ceasar then transferred to Hilltop High School. He graduated from Hilltop in 1961. He married Ana Maria Banuelos in 1972. They moved to Bonita. After 40 years in Bonita, they moved to the Rolling Hills area of Chula Vista.

Ceasar attended Southwestern College, then San Diego State. In 1967 he graduated from San Diego State with a bachelor’s degree in Electrical Engineering. His first professional job was at the Navy Electronic Laboratory on Point Loma. While working at the Navy lab he received a scholarship to Purdue University. He earned a master’s degree in engineering in 1971. He retired from Navy lab after 35 years. He continued to work another 10 years for a private company, G2 Software Systems.

After retiring, Ceasar started researching his families’ genealogy. His parents were from Baja, California. In his genealogy research, he discovered that he is a descendant of the first Castro in Baja. He was a soldier that came with the Jesuit priests to Baja in 1697.

In 2018 Ceasar became the President of the Chula Vista Genealogy Society. After serving 2 years his term ended. In 2020 he was elected President of the South Bay Historic Society for a 2-year term. However, he is still on the SBHS board.

Each of the three government organizations have a Citizen Advisory Committee. The Three Advisory committees meet quarterly.

Having lived in South Bay area all my life, Ceasar has seen the disappearance of farmlands and dairies, the closing of Rohr Aircraft and the construction of Interstate 805. He has also seen the expansion of the city of Chula Vista going East.