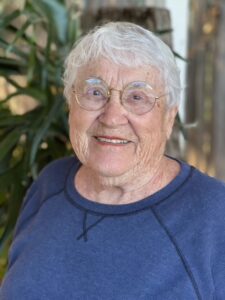 Patty Huffman was born in Oceanside, CA, in 1930 and moved to Chula Vista six months later.

She attended F Street School (The Chula Vista Library is now at this location), Chula Vista Junior, and Sweetwater High.  Her senior year was spent at the new Chula Vista High which was housed at Brown Field.  It was an army base on Otay Mesa. She attended SDSU and graduated from Whittier with a teaching credential.

She started teaching in Chula Vista in 1954 at Hilltop Elementary School. Her longtime friend became her husband,  Wylie Huffman, an engineer at General Dynamics and together they established their home at 163 Garrett. Their first child, Kevin was born in 1956, and Robilee in 1958. She did not return to teaching until the late 60’s.

She retired in 1991 and enjoyed extensive travel during the next 30 years. While she doesn’t  travel much now she is still enjoying life by volunteering, play duplicate bridge, and enjoy her two granddaughters, along with meeting new friends.

Her father was a Captain in the Chula Vista Fire Department back in 1945 while her mother worked for the post office and elementary school district here in beautiful Chula Vista.