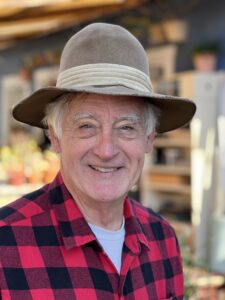 Mitch Beauchamp has been around National City for 75 years. His wife for 53 years, Martha, and two daughters, Vanessa Beth, and Nolina Lynn, are all National City natives (both daughters being Phi Beta Kappas!). While working as the manager of a Mexican railroad, he also took on Mexican citizenship, all the time loathing spicy food!

He has a Master’s Degree but, due to miliary service or in New York for post-graduate study, never “walked” for his degree diplomas. His M. Sc. degree focused on the floristic aspects of the native plants of San Diego County and he published A Flora of San Diego County , a compilation of the plants of the county in 1986. His service as a Lt (jg) aboard a Naval destroyer in the Western Pacific allowed him access to Asian and Pacific botanical wonders.

He has been a biological consultant since 1974, employing within his two companies, about 50 folks, many now in biological careers in government or the “dark side”.

He has been on many committees at the city and state level and been an elected official since 1994, currently being the Treasurer of the City of National City.

He has been active in many botanical and horticultural groups, editing the state Native Plant Society newsletter and an international botanical journal. He is actively compiling treatments of the Pipe Organs of San Diego County (he plays piano and pipe organ for churches!), Dairies of San Diego County (his family once had a cow that provided milk on the family farm in National City), Place Names of San Diego County (names and their histories are fascinating) and a Flora (en español) of the Baja California Peninsula and adjacent islands.